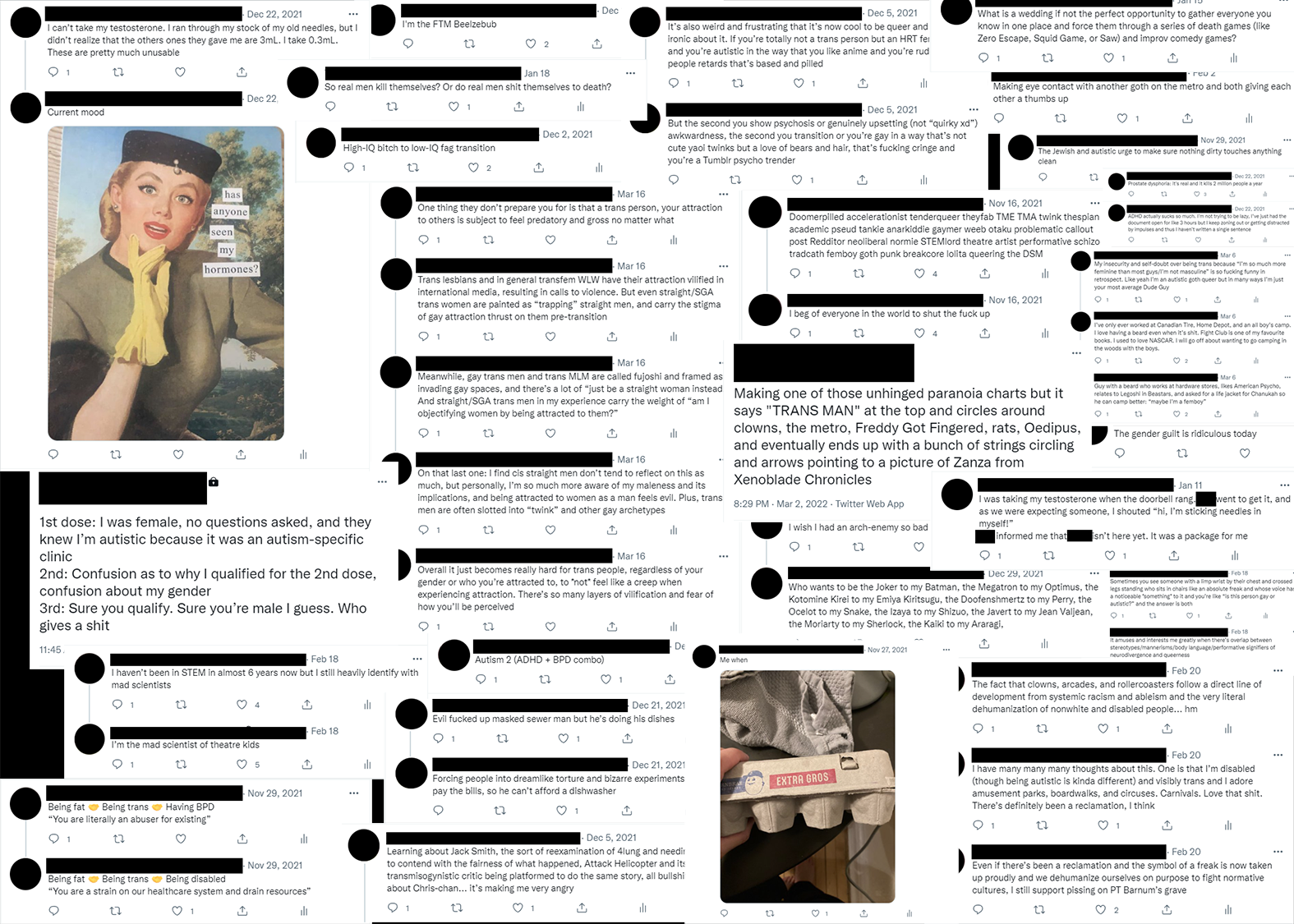 BENEATH THE MASK (ARTIST'S STATEMENT)

The particular aesthetics, functions, and nuances of transgender identity and autism–and specifically their intersections–have long fascinated me. I know that my identity is something very specific and particular, with a lot of unique peculiarities. Expressing those is a whole other matter. Over the course of this semester (and, admittedly, a bit prior) I have begun to tease out those peculiarities, and explored them through art: websites, writing, and my alter-ego Sir Inge, a mad scientist sewer man.

I began to deconstruct irritating factors of typical gender discourse through Judith Butler’s approaches to gender performativity: all of the disconnect I felt from other trans people, and the nuance of the specific transphobia I have faced, was there in the analysis of performing gender, a framework that explains the way transition has been a process of embodiment. Indeed, through Sir Inge, I have been attempting to embody masculinity and maleness–but specifically a queer, transsexual, autistic, developmentally disordered, subcultural maleness. I also found Butler’s outlook on the potential of trans men to reimagine and reinterpret manhood in their Guardian interview inspiring.

Another major jumping point was Paul B. Preciado’s text “The Micropolitics of Gender in the Pharmacopornographic Era”. It resonated with much of what I have ruminated on for a very long time: medical transition, self-experimentation, the transsexual as a mad scientist, transmasculinity, subculture, sex, horror, trans-feminism, technocapital, and medicalization, just to name a few. Preciado’s influence pulses like a blood flow through the work of Sir Inge; I can’t help but feel I was beaten to the punch.

Several more writers, ideas, and art pieces helped inspire Sir Inge. Along the technocapital and horror veins of Preciado is the work of the Cybernetic Cultures Research Unit (CCRU), whose writings I have been obsessively poring over with other autistic trans weirdos; said work is the predecessor to the Accelerationist movement, a much-misunderstood philosophy with several warring branches. I am particularly interested in Gender Accelerationism (G/ACC), and the G/ACC Blackpaper by n1x (also known as Nyx Land, not to be confused with Nick Land, who is a fascist bastard) has been influential in my understanding of gender, transition, and its relations to the world. Other influences include, but are not limited to: Sigmund Freud (who was my jumping off point for the Superego text); The Phantom of the Opera (particularly the Andrew Lloyd Webber musical); various other “evil fucked up masked man” media (Alan Moore’s V for Vendetta, James Wan’s Saw, Terrance Zdunich’s Repo! The Genetic Opera, Batman in general, Kotaro Uchikoshi’s Zero Escape: Zero Time Dilemma); plague doctors as a figure in history; gothic fashion and ravewear; and many more that would take hours to list. The problem with influences, whether artistic or political, is you accumulate hundreds or thousands of them across the years.

This site could go on forever. It is composed of several texts and images I’ve made, some from over a year ago. I have many more that didn’t make the cut, or are just biding their time until I add them (inspecting the source code may reveal a dummied-out dead-end link; this would lead to an explicit G/ACC text I started 2 years ago and still have yet to be satisfied with). Who knows? Maybe it will. Sir Inge still has a lot to say.